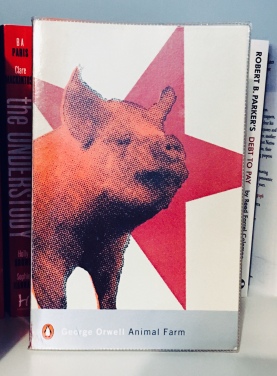 A farm is taken over by its overworked, mistreated animals. With flaming idealism and stirring slogans, they set out to create a paradise of progress, justice, and equality. Thus the stage is set for one of the most telling satiric fables ever penned—a razor-edged fairy tale for grown-ups that records the evolution from revolution against tyranny to a totalitarianism just as terrible.

When Animal Farm was first published, Stalinist Russia was seen as its target. Today it is devastatingly clear that wherever and whenever freedom is attacked, under whatever banner, the cutting clarity and savage comedy of George Orwell’s masterpiece have a meaning and message still ferociously fresh.”

I have been wanting to re-read this book for a while now, ever since disliking this book originally when I first read it at a younger age and then discovering the true meaning behind this classic novel. Why this short novella took me so long to re-read I have no idea, but on doing so this book instantly jumped higher in my thoughts, not just my ratings and I can see why this book is so popular and why it is taught and is so heavily loved.

When I had first read this book at a young age, so I will try to excuse my ignorance, I truly took this book for what I read, which was a book simply about an animal farm. This was ultimately the reason why I originally disliked it as much as I did. But upon re-read, knowing exactly what this book is truly about, I got to experience the true brilliance of Orwell’s writing. It made me wonder how I had missed this the first time round, but as I have matured as I have got older, my reading has also developed and matured.

Orwell’s books always make me think while I’m reading his books and especially so after I’m finished, just like when I had finished reading 1984, which shows how powerful his words truly are. I had originally only read 1984 by George Orwell and Animal Farm, finding myself loving and hating one of each. Now that I have re-read Animal Farm and thoroughly enjoyed it, now I am eager to try out more of his writing.