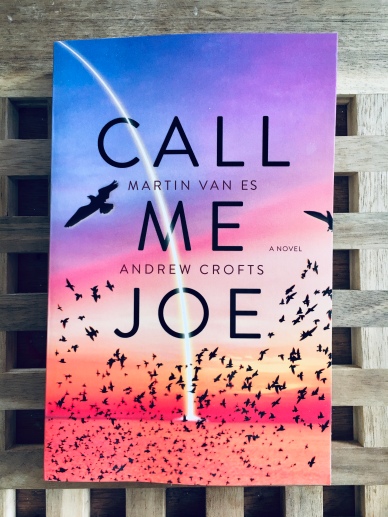 “The world is on the brink of disaster.
The environment, society and mankind itself are facing extreme challenges in a world that is both more connected, and yet more divided than ever before. Fear and confusion seep into all parts of everyday life now, more than ever, the world needs one voice, one guide…

One day the Earth is plunged into darkness and when light appears again so does a man – call him Joe – claiming to be the son of God.

Can Joe bring the world’s most creative thinkers and leaders together to tackle the ills of mankind?

Can he convince us all to follow him before it’s too late?

In this compelling and prescient novel, Martin van Es and Andrew Crofts highlight the key concerns of our time and imagines a future where we, at last, all work together to ensure the future of our world and all the life that calls it home.”

Call Me Joe opens on the world that is about to go into complete and total darkness out of nowhere, with the blacking out of the Sun. Everyone around the world is left wondering what is happening, if this is some form of attack and if the light is going to come back. Twelve minutes later, everything comes back to normal, but now it has left people wondering what has happened and what will happen if the sun goes out again. Permanently this time. Then out of the darkness, a man appears, who says his name is Jesus, but you can call him Joe.

I do want to give a little heads up for people who are about to go into this book, if you couldn’t tell from the synopsis, there is a religious undertone to this book, which can be a turn off for some readers. I wouldn’t have said that this was a book that I would’ve been primarily aimed at me because of the religious aspects to it, but it did surprise me. I am not a religious person, but I do enjoy learning about and understanding different people’s beliefs, which is why I studied Religious Studies, so I actually enjoyed that aspect of the book. Although there is a religious element to this book with Joe “claiming” to be the Son of God, that’s not the entirety of this book. You get a perfect balance of science and religion and how they work in harmony with each other and to fix some of the problems we have on Earth, which is ultimately what the actual storyline of this book is. Saving the Earth from our stupidity and greed, before it’s too late.

I really enjoyed the writing style of the book and it did suck me right into the story, especially one as realistic as this story, with where this Planet is currently heading. I was actually shocked to discover that this was a debut novel for this author and this is one of few translated novels I’ve actually enjoyed, so that’s a massive thumbs up! I would be interested to see what this Martin is going to do next and is an author I’ll be keeping my eye on.

The story itself was a little different from what I was expecting and I take back my Goldilocks similarity expectation. This book does hit on some very true facts, which is scarily true, which is that we do need to make some serious changes before it’s too late to do anything about it and we’re left with nothing. So this book did make me open my eyes more clearly and think about what I can be doing.

Martin Van Es is a Dutch entrepreneur, father and grandfather. Born in 1959, the youngest of three children, he studied clinical psychology in Groningen, but got distracted by partying and a permanent lack of money. In 1986, he became a father to his daughter, and his son joined the world in 1989,spurringhim forward to quit studying, focus on working and start living more seriously.

After graduating in international marketing, Martin took a job as a purchasing director, enabling him to travel the world. He then became director of a packaging wholesaler in Arnhem, The Netherlands. Over 14 years he developed the company alongside his team to create a leading player in the international packaging industry, working on more sustainable packaging concepts. In 2005, Martin sold the company to the largest distributor in the packaging world, and he ventured into volunteering, investing and advising companies. Martin is particularly proud of father-and-son out door events company, MooiWeer, on the beautiful island of Terschelling.

Between 2013 and 2017,Martin was director and co-owner of a large, international group of packaging wholesale companies specialised in environmental issues. The role, as well as the birth of his first two grandchildren, have had a massive influence on Martin.

He started writing Call Me Joe in 2017, and asked Andrew Crofts, as a prolific ghost writer, to join him as co-writer in 2019 to make the story the best it could possibly be. Martin hopes the book will provoke conversation, challenge the status quo, and encourage people to question more about what is happening in the world, to question their leaders, and to consider their role in the future of the planet.