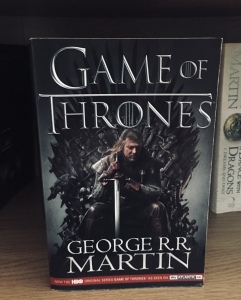 I have been so undecided about whether to begin reading this series, I even read the beginning to see if I could get into it. Again, I put it off. With the final series of the television adaptation and working in a book shop, more and more people have been buying and reading this series. And worse yet, talking about it! So I bit the bullet and dived in…

My problem with this series, one of my problems, was that with it being fantasy (a genre I rarely read), I was having a hard time getting into this book, or should I say this world. So to try and push through that I turned to and downloaded the audiobook version so that I had no choice to stop and listen to it, to get into this weird world. Once I was in, I could go back to my actual physical book.

I am so glad that I started off listening to the audiobook first because, yes I did end up getting into this book and because OMG the weird names I would’ve struggled to pronounce, especially as I haven’t watched the tv series. Although, I wasn’t a fan of the narrators voice, there were some characters whom I really liked, but listening to the narrator read the character, doing a voice, was ruining it for me. So back to the book!

The book was better than I was expecting, which believe me, I wasn’t expecting to like it or to finish reading it. There were parts and sections where I was thoroughly entranced and gripped in the story, but then I was actually saddened when something happened that ripped me away from the story. Something I didn’t like, something I didn’t agree with or just simply irritated me.

There were characters that I really liked and believe were really well developed, but there were some that I just didn’t understand and I couldn’t connect with. Maybe this just needs to be explored over the rest of the series and wait to see how these characters develop. To see if there is more depth to them, more character to these characters.

The book ended leaving me just wanting more, and actually shocked! I wasn’t expecting certain things to happen, and I am actually tempted to now pick up and start reading the next book in the series. To continue with the storyline, that definitely wasn’t completed and to continue with characters, who again, don’t seem complete. I do want to continue this journey and see how it goes because for the amount of characters and things going on, maybe he’s being too adventurous, or hopefully he has a plan I’ll see unfold throughout the books. Either way let’s see.

One thought on “Game Of Thrones – George R.R. Martin”